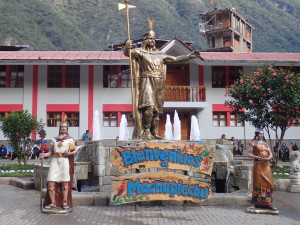 For someone who tends to be more talkative than most I’m not really sure where to start. How do you put into words the spectacular sights and feelings of one of the Seven Wonders of the World? I’m not really sure I could have explained beforehand what I was most looking forward to about seeing Machu Picchu. After having been to the ancient city, I will tell you that very few experiences, if any, can match the time we spent in Machu Picchu.

To give you a little background, the ancient city of Machu Picchu was created by the Quechua people. Most people think the Inca’s were the builders of the city, when in reality the word INCA means King. There were only 14 INCA’s, which ruled over a vast territory that had been conquered over a long period of time. It is believed that the city was created as a holy place due to it closeness to the gods (on top of a mountain). This is supported by the numerous temples and holy spaces in the city. After having stood in the city, I can understand why they would have believed this. There is an amazing feeling when at Machu Picchu. You not only feel overwhelmed by the vast spaces and depth of the mountains, but also a tremendous feeling of being on the top of the world. There were quite a number of people who said they were experiencing feelings of vertigo, but I believe it is more than that. There is something truly moving about being in a place where past meets the present from a remarkable vista. 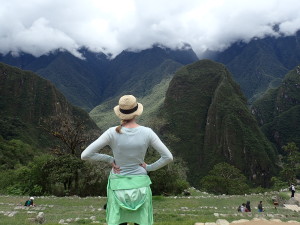 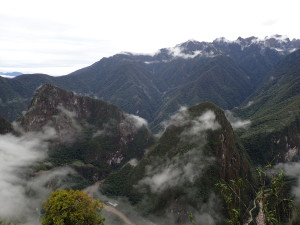 One of the most amazing things for me personally was the skill and accuracy through which they constructed the city. Using rudimentary tools they were able to create structures that not only withstood the daily elements of rain and wind, but also catastrophic events such as earthquakes. To give you a few quick examples, they chose the location for the city due to the availability of stones and fresh water on top of mountain. The stones typically were huge boulders which were split, smoothed, and moved to make temples, houses, agricultural terraces, staircases, and much more. These “rudimentary” tools and ways were truly amazing. In this particular city archaeologists have found tools made of materials from hundreds of miles away which allowed them to chisel into the granite to create holes and slits for the insertion of wood. They then poured water onto the wood to get the wood to expand. This created enough pressure to make the granite crack and break. These rocks were then smoothed to create prefect joints that created amazing structures without the need for mortar to hold everything in place. Another amazing thing was the “milling” on protruding stones to be rounded for both internal and external use. The externally protruding rounded stones on buildings were used as tie down points for their woven roofs to protect against the strong winds at the top of the mountain. The interior protruding stones were used for hanging items that were relevant for the building; either items for living in a house to more religious items such as clothes or carved items. Additionally, nearly every window and doorway was created with an inward slant to provide stability for earthquakes and natural disasters. Finally, they enclosed the city with tall walls and 2 entrances which could be well protected and had doors that could be locked and opened only from the interior. 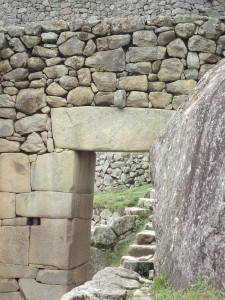 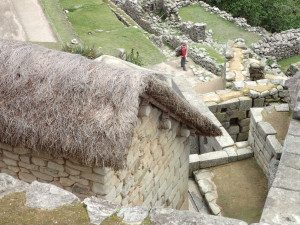 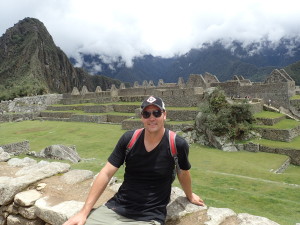 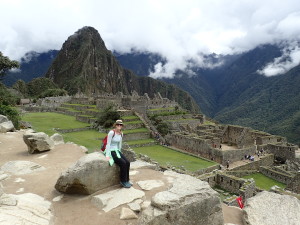 Another amazing thing about Machu Picchu is the division of the urban area and the “agricultural” area. There are over 700 terraces which were used to provide food for the city. The pictures really don’t do them justice, but the amount of stone, drainage, and irrigation work was truly amazing. 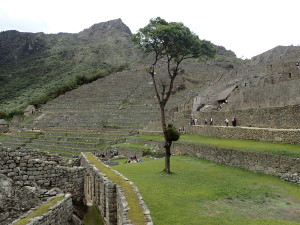 Providing water to the city was another incredible feat of engineering. The Quechua designed amazing waterways which were carved into the granite to provide water throughout the city. Archaeologists have determined that given the amount of water that the city could produce was able to support around 1,000 people. On our tour it was explained to us that the city probably sustained around 750 people allowing for the additional 200-250 people that would travel with the Inca king when he traveled to the city. Pretty amazing when you think about it. Apparently there was only 1 toilet in the city which was reserved for the king. Everyone else dug little holes to do their business. Interestingly enough, it is believed that this “fertilizer” was harvested after a while and used in the fields.

Given the immensity of our journey, Autumn and I decided to arrive as early as possible. We woke up at 4am and were standing in line at the bus stop at 4:30am to be able to get on the first bus. We were able to get on the first bus and be within the first 20 people into Machu Picchu that day. We chose to head straight to the Sun Gate, which is the first place the sun appears over Machu Picchu. The hike wasn’t easy, but definitely worth it. We arrived right around when the sun came over the mountain and were treated to some amazing, albeit cloudy/foggy, views. The best part was that we only saw three other people on our hike to the Sun Gate and were able to soak in the views just the two of us. 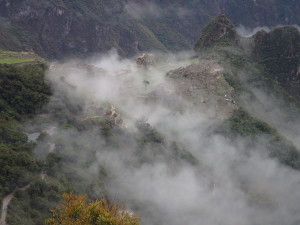 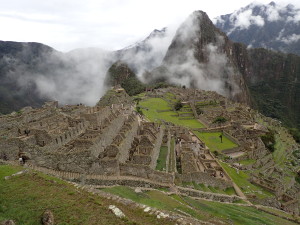 We spent a couple of hours just the two of us before our scheduled tour. All told we spent six hours in Machu Picchu trying to absorb as much of it as we possibly could. We heard that as of January 1st, 2016 they will be restricting access to the city to prevent deterioration, limiting people to 2.5 hours at a time. While it would still be an amazing and worthwhile adventure, we feel incredibly lucky to have been able to explore as much as we did.

As a full disclaimer, I am well aware that my words and even the pictures we post will not do justice to the amazing beauty and wonder that Machu Picchu provides. The experience is worth the trip, the expense, and the early wake-up call. It is truly an indescribable experience that can only be understood while there. If I could make a recommendation, GO. Go now. The world is changing quickly and it should be experienced before it is too late.