After our incredible time in Haucachina, next on the itinerary was a stop in Nazca to see the famous Nazca Lines and then on to Arequipa. After much deliberation and research, Autumn decided against doing the Nazca flight as she was worried about getting motion sickness on the tiny plane. Since I do not get motion sickness, I was totally up for the flight and stoked to see the Nazca lines from the air, which we were told was the only way to see all of them. That morning I got up early to catch the public bus to Nazca with a group of 8 other Peru Hoppers. The bus ride was uneventful and not overly scenic. When we arrived in Nazca we were picked up and taken to the airport. As it would turn out, we weren’t the only ones who wanted to see the Lines from the air. Our 11am flight time turned into a 1pm flight time due to the amount of people in the tiny airport. 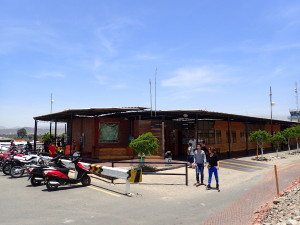 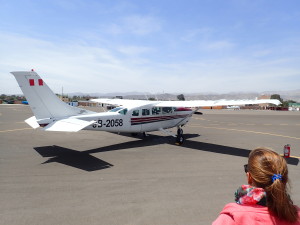 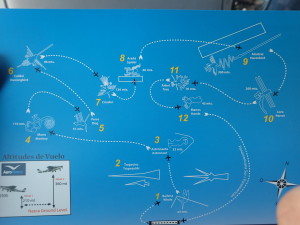 Once in the air we were treated to some amazing views prior to reaching the Nazca lines. It was in this glorious 4 minutes that we got to enjoy the flight. Once we reached the lines, things changed. In order to get the best views of each line the pilot would first bank the plane hard to the right to show the people on the right side of the    plane the lines. After we spent 10-15 seconds tipped at a 60 degree angle to the right the pilot would do a turn and then tip us to the left 60 degrees. At first this wasn’t a problem, but rather quickly it became one. Fortunately everyone on the plane held in their lunch, but it wasn’t without a lot of effort. The views from the plane were great, but honestly I was expecting more from the Nazca lines. It was a good “check the box” adventure, but I would be hesitant to recommend it. Here are a few of the pictures from our not too professional camera. 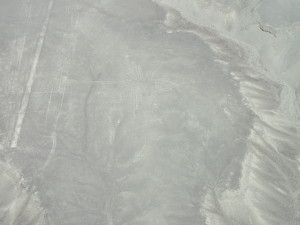 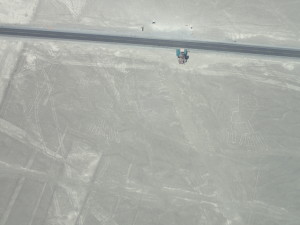 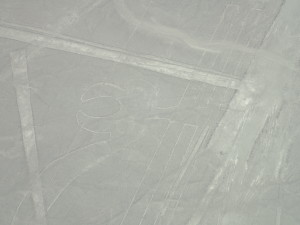 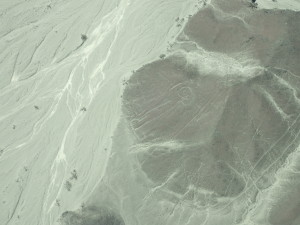 After we landed, I was feeling a little wobbly but nothing too serious. We spent the afternoon in Nazca (not much there) had some lunch and then met up with the Peru Hop bus and Autumn at 7pm. The bus ride from Nazca to Arequipa was an overnight ride up through the mountains and turned out NOT to be what the doctor ordered. Let’s just say that I still wasn’t feeling great from the flight earlier in the day and the zig zagging bus ride did me no favors. After doing my best to keep from getting sick, the shit hit the fan at around 12:30am. While I tried my best to put my tossed cookies in a plastic bag, unfortunately not all of them made it. Not good. Autumn was a huge trooper and was helping clean up when (due to the horrible smell) it was her turn to call dinosaurs. Really not good. We were able to get everything cleaned up, the bus stopped to get rid of the evidence, and back on the road without too many others on the bus waking up or even noticing.

That night was totally miserable and we didn’t get any sleep. We arrived in Arequipa at 5:30am and were due to get on a day tour of a really neat canyon at 7:30am. Did. Not. Happen. What did happen is that we spent the next 3 days holed up in our hostel room taking turns being sick; not a fun way to spend your time. The rest of the story is that we didn’t get to see anything in Arequipa and were happy as can be when we recovered enough to move on to Puno.

We weren’t totally out of the woods, but we were up and about and feeling much better. It is nice being back from the dead.